First things first: I love Helsinki. That said, I want other people to love Helsinki, too. This is reason why I decided to become a tour guide.

If I had to describe Helsinki in one sentence, it would be: “A gem in disguise”. At least the very core of the city centre, that is. A small gem in disguise, compared to other capitals, but that exactly makes it so charming. You can feel at home after one day, because you can’t get lost.  At some point you always end up at the sea-shore and then you just follow the shore-line back to South Harbor. If you don’t hit the sea at some point, you are unfortunately heading up North to Helsinki-Vantaa Airport. Once you reach it, you can then take a bus or train back into town. 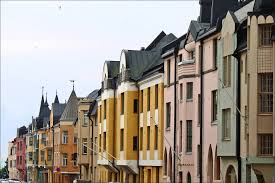 Helsinki houses an impressive assembly of art-deco apartment buildings from the late 19th century into early 20th century. Over 600. This alone creates an atmosphere of friendliness that is hard to beat, even though Finnish Art Nouveau has at times a somewhat bold and hefty connotation to it. 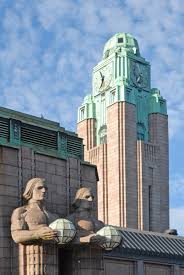 There was a very national romantic undercurrent during the time when the larger part of Helsinki-Art Nouveau was built. Finland was struggling for independence from Russia, which resulted in some monumental granite-inspired buildings, like the Parliament. I think, they really wanted to take a stand. I am sure this circumstance is one reason why Finnish Politics is so calm and no-nonsense level-headed. Their feet are safely glued to indestructible granite. It really makes it difficult to hover above ground and get all hyped up over things. 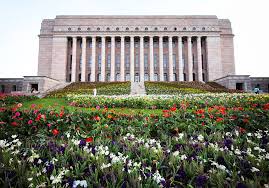 Unfortunately, Finland was later hit by a phase called “functionalism”. The phase is still going strong and impacts all areas of society and the outer areas of Helsinki in a frightening speed. Although I like some of the buildings that were built during this phase, I consider the chosen locations of some of them to be highly debatable. Especially, after learning what they tore down in order to build them.

But tearing or burning down is an inherent pattern to this city that used be a homely, middle-sized wooden town way back when  Finland ascended to a Russian Grand Duchy in 1808, which afforded a more prestigious appearance of the capital.

The newest phase of city development sees a transformation of shut down harbor and industry districts into ultramodern housing areas in a typical Scandinavian style. Despite of the properties being densely built over, these areas have a pleasant feel to them. They are functional and often decorated with design features and art elements. Water front recreational areas and public transportation are located near by.  Many, if not most, offer sea view to some degree. Ah yes, expensive they are, but we wouldn’t have expected otherwise in a Scandinavian city. 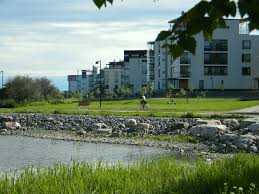 So, when you come to Helsinki (“if” is not an option, in my humble opinion), the stage is set nicely for experiencing the Southern version of Finnish culture in any way you choose.

An actual trend in the travel scene suggests that you should strive to experience Helsinki like a local and hunt for hidden gems. As if locals were a homogeneous group of people with a mystic predisposition for better taste and spotting gems.  As if one could hide anything in Helsinki. My suggestion would be to go with the flow first and join some of the well-organized tours around the city. Once you got your orientation in place, you can do what locals do: choose what attracts you, give it a try and you’ll find your own gems.

There is a well-organized and huge amount of information material waiting for you in the tourist information office at the corner of “kauppatori”, the main marketplace.

In my opinion, you should not miss

–  a boat trip of any kind into the archipelago that stretches out into the Baltic Sea in front of the capital. If you can convince a local to take you sailing, this would be a gem, of course. In the wintertime, you can go skiing or kite-surfing on the frozen sea.

– a walking tour in the city center, in a group or by yourself

– a visit to any type of sauna you come across

– and a coffee or lunch break at the sea-shore.

Doing this will allow you to find so many little gems that you will have to come back at a later point to savor them all.

Finland, Helsinki included, prides itself to offer four main seasons and four transitional seasons. I suggest, you miss April and November. Unless you want to find out first hand the reasons for the temporarily curbed spirit in the country.

Summer stands for exuberant vitality, January through March for blinding white snow and clear blue sky (the colors of the Finnish flag). December will see you spending chunks of money on candles, late summer and fall will have you crawling through mossy forests, hunting for mushrooms, berries and autumn color photographs.

If you can’t avoid April and November, there are lots of cozy coffee shops, museums, galleries, design shops, fancy restaurants, concert halls or bars to enjoy.  Just make sure you have your credit card on board.

Should you still like to get some specific support for your personal gem-discovery, I will be glad to help you.  Just send me a question. I don’t know everything, but after writing a travel guide and roaming Finland for 10 years, I can hopefully be of service. However, Helsinki really is a safe bet. Wherever you go, you will find something interesting, beautiful or at least something odd to ponder about…