Just imagine you are going on a ride with your bicycle because the weather is gorgeous, you have a free day and you decide to browse some parts of the city that you haven’t seen for a while. Helsinki is changing so quickly in the last years that it is at times difficult to keep up with the changes.

So I took a tour through Ruoholahti, a new, super modern urban area still under construction, with a mix of large “Design-Apartmentblocks” like below (called pitsitalo, meaning “lace-house”)  next to historic industrial sites (my camera or my computer is doing strange things with the pictures, no idea what happened). 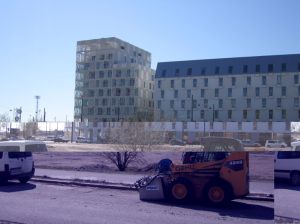 When I saw people lining up on the bridge to Lauttasaari, I became curious. The promenade was also lined with people and I started wondering: what’s going on there?

Well, being in Finland I should have guessed. The secret is called Silakka. Baltic Herring. They are migrating (pretty early, as I take it, due to the mild winter may be) and” they seem to be really stupid”. All people need to do is hang out a fishingrot with several hooks called litka, not even a bait is needed, and they can pull out a whole bunch of them at a time and fill their buckets. 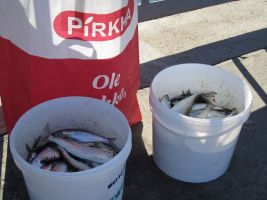 If you have ever wondered what Finland is about, this is definitely part of it. There is not only a short distance to power (meaning, I wouldn’t have been astonished to find the prime minister among the crowd 🙂 ), but there is also a short distance between “urban life style” and “self-sufficiency life style”. Free fish easy to get? Mennään, let’s go.

However, the idyllic scene of “unspoiled nature” is deceiving. Silakka numbers have declined dramatically over the last decades.  While in the 1980 the Gulf of Finland provided still around 20 million kg of Herring, in 2010 it was only 3.4 million. Silakka is overfished as it serves as nutrition for salmon and fur farms. In addition, the Baltic Sea is pretty polluted. I was advised by some fishers who I consulted with to take the younger, smaller fish, should I ever try it, as they haven’t ingested so many pollutants.

While this  sounds reasonable, at the same time, Finns eat an enormous amount of farmed salmon and rainbow trout each year, who have accumulated the pollutants from all the bigger silakka…  Ah well. Let’s not spoil the fun and enjoy some urban scenery… 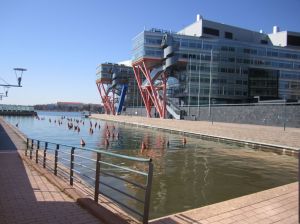